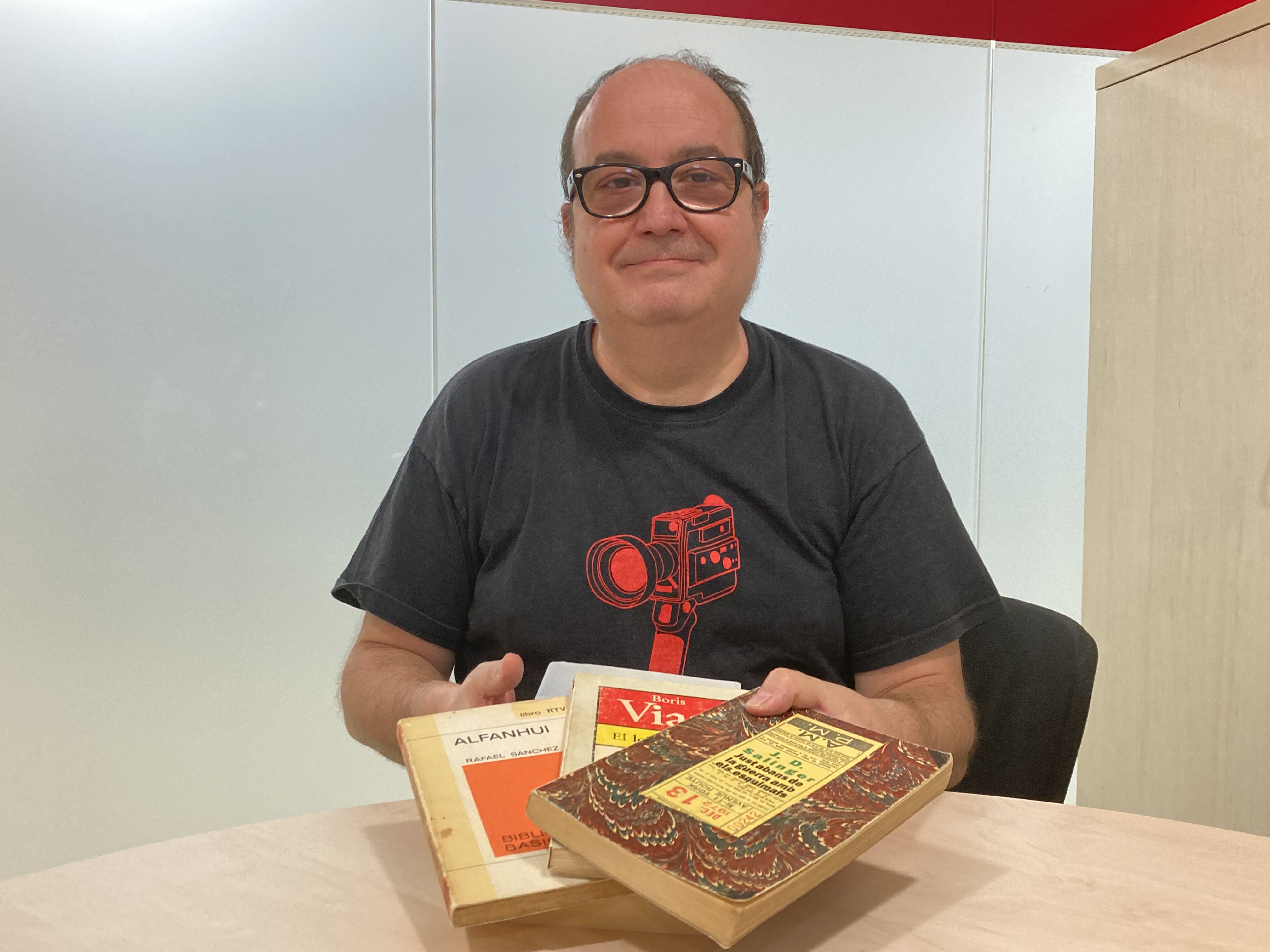 "Writing is a way for us to prove our strength as patients, our power over the disease"

What did you think when you had your first contact with the RELAT-Hos project? How did you get to know it?
I remember being admitted one afternoon for tests. In my room, I had a 92-year-old roommate. He was a bit nervous and we started to chat a bit. He explained to me that he had fallen while changing a light bulb. Afterwards, while I was having dinner, I followed the conversation between him and his daughter, a woman perhaps in her fifties. The next morning we could only see each other's faces through the curtain that separates the beds in between. That morning Antonia came to tell me about RELAT-Hos, which as far as I remember had just started. It kept me thinking all night that I could write a story about my roommate. I had an idea in my head; I really liked the project and even more that I had been told about it. Maybe I would have written something even if Antonia hadn't turned up; I would have written about him too, I don't know, but anyways, that's how I got to know the project and I was fully occupied with writing during the five days I was in hospital.

Your case is a bit special, because originally Poniendo orden, llegué al hospital (Tidying up, I arrived at the hospital) was not a single story...
Indeed. I wrote a story for the first day of my stay at the hospital. I imagined a story about that man for the first night and then I wrote about something I knew would happen to me the following days, a test for example, or about what the Old Nursing School building, which I could see through the window, suggested to me. In addition, the final touch was to imagine a party inside the ward! simply because it was my last day there, I was waiting to be discharged and I was happy. Then I added a beginning about how I arrived at the hospital as a result of assembling a cupboard and an ending when I went out into the street. This way, the result was a story per day, like a little imagined diary of my stay.

Do you write regularly? In case you do, did that make it easier for you to write your short story?
I have written stories since I was 6 years old. Until I was 9 years old, every summer I wrote a story. When I was finishing it I was already thinking about the title of the next one and what it would be about. Until I was 10 or 12 years old, I carried on writing stories and I even edited them for my family, with a typed version and the original handwritten version that included drawings. Actually, it's something that comes from my childhood, that writing; maybe because of my father's influence, who was very fond of photography and cinema and framed everything. He used to write stories to shoot in super 8, short films. Maybe that's where I got the habit of focusing, and when you focus, as you can't see what's around you, you just imagine it. Then I've always written little things, and I ended up studying to be a film director. Then I started to write many things, like scripts, always thinking about audio-visuals, stories for cinema. Then I had a break in writing until 5 or 6 years ago, when I was diagnosed here in Bellvitge with an unspecified myopathy. As a result of that I got depressed and a psychologist recommended me to write 30 minutes a day about a subject that was on my mind. So I started to write about my sadness, thinking that this way I would get it out of my head, but horribly I ended up crying. At that point, I decided to write a story every day. I created a blog, El largo viaje a AP(Á)TIA (The Long Journey to AP(Á)TIA). Every day I would write a story starting where the previous one ended. It was a great journey to an imagined country; it was a journey where I encountered all kinds of beings and adventures. I began to laugh. Every day I would write non-stop until I would get the story finished and uploaded on my blog. This went on for 3 months in a row. Since I wrote the micro-stories that make up Poniendo orden, 3 years ago, I have written very little. Nowadays I'm at a point where writing would probably make me good, but I just don't have the strength to; you don't always have the strength to write. Writing helps a lot, but you don't always have the strength to write.

Do you think writing is a powerful therapeutic tool?
Writing is very therapeutic in either case, whether you are in hospital in a bed or at home. Wherever you are, it allows you to empty what's inside you and it's perhaps the most complete form of all the arts, because it's coming from inside you. You take out words that you carry inside and can hurt you. By taking them out and putting them into a story, they can disappear from your head. When you are in hospital, the relationship is always between you and the illness. The team of doctors and nurses act as an intermediary between you and the illness. So, putting a blank piece of paper in the middle, between the illness and the patient, means covering up the illness with words, hiding it so that the paper makes you a little happier to be there. It is about putting a barrier between you and the illness; by putting the paper in between, you can change your mood. Writing something that changes your current situation thanks to an imagined extraordinary event, will make you write extraordinary things continuously. The illness will not go away, but by writing, you might become more cheerful and be able to laugh at things. It's a way for us to prove our strength as patients, our power over the illness: you're f-ing with me, but I'm writing and I'm getting good at writing. It's a momentary power, but it makes you feel that, apart from being ill, I'm also writing, and I'm doing something at the hospital and for the hospital. This power puts me above the illness, as well as above the doctors, who are the intermediaries with it. In this bed, in this room, I have a power, because I write.

How did you feel when you saw you story published in the book?
Reading the book is also therapeutic! Reading my story in the book made me think: wow, I've written something editable, that will probably be read by a lot of people because we are in a hospital, and you feel very happy to read it as a reader who is discovering it for the first time. And it was also a surprise to find the whole volume of RELAT-Hos, because I thought the stories were astonishing. Many of them take you down an unreal path, looking for things that aren't in the room and they’re making up hilarious stories! People want to write and they do it very well. This shows me that stories are a very good therapy and that people get into this imaginative game and do it with humour, with tenderness, sometimes with sadness and they manage to make something funny out of a lurid aspect! It’s an exciting book to read, because we're all going to fall ill one day, all of us. And I think it's fantastic that there has been a second book and that there will be a third one, a fourth one, a fifth one...

Finally, can you recommend us a book?
I will recommend books having people in hospital in mind. While in hospital I would recommend reading magical reality books, science fiction, short stories. Jules Verne, for instance, who is very good and very imaginative, he always takes you to very funny places and realities. In short, things that make you fly. Children's stories too, like Little Nicholas, for example. Reading them here is the best thing that can happen to you. I've brought some as examples: Alfanhuí, by Sánchez Ferlosio, a child book; stories like those by Salinger or Boris Vian, or Foster Wallace. And going a little further, Mirall trencat (Broken Mirror), by Mercè Rodoreda.